What if we could 3D print structures with a material ten times stronger than steel with only 5% of the density? Markus Buehler, the head of MIT’s Department of Civil and Environmental Engineering and the research team of Zhao Qin, Gang Seob Jung, and Min Jeong Kang claim it can be done. Zhao Qin says he wants a space elevator built from their new material. Hear here.

Build Me a Space Elevator

Graphene is technically a nano-material. Graphene is a two-dimensional form of carbon that's considered to be the strongest of all known materials. Did I mention that graphene is self-repairing. The “2D” form of graphene is only one atom thick so graphene is basically impractical for building purposes without some inventive help.
MIT innovation to the rescue.

We all need and lust after that bendable and indestructible smartphone next year. Graphene is considered by many to be the magic key.

You probably missed my original post (The Graphene Blender in Your Future) about the Irish AMBER alert on how you too can produce graphene is your kitchen with your margarita blender albeit with some patience and persistence. The post includes written instructions.

Samsung and other significant US, European and Chinese companies have actually spent billions (billions with a B) attempting to mass produce graphene in the last decade. Then Thomas Swan Ltd announced back in 2014 the ability to produce tons of graphene for cheap using technology as old as the industrial revolution. Dooh. Read the post.

The other race is for super-structural materials. These folks at MIT may have cracked the code. They first announced the results in July 2016 and were published in in the journal Science Advances last week. Go highbrow, blend your brain a bit, and read it.

They were in hot pursuit of a pristine gyroid graphene structure. That is akin to rocket science.

Zhao Qin says,
"It’s a very innovative material because if we can produce the material in big amounts, we can use that to somehow substitute some of the steel used for construction and infrastructure. We could save a lot of labor to construct infrastructure and buildings because it is so light and so strong." 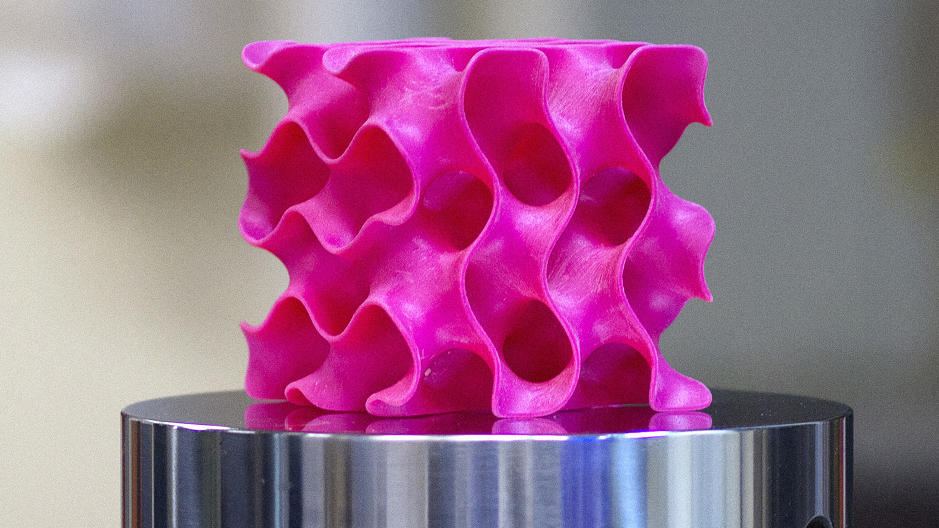 The basic idea is to produce a repeatable production pattern that produces paper thin structures with super light densities and super strength. Think of rolled paper or steel being much stronger the sheet paper or steel. Think of that in a topologically twisted 3D space and you’re getting there. Totally tubular! Dude. Now…

The MIT folks developed computational models of the form and then recreated it with graphene in a new groundbreaking material production process. It worked.

Here’s a twist. Next on their agenda do it with other cheaper materials. The structures and 3D printing methods can be employed with other materials that are a bit heavier but much less expense than graphene. But then…

What Will We Do with All the CO2?